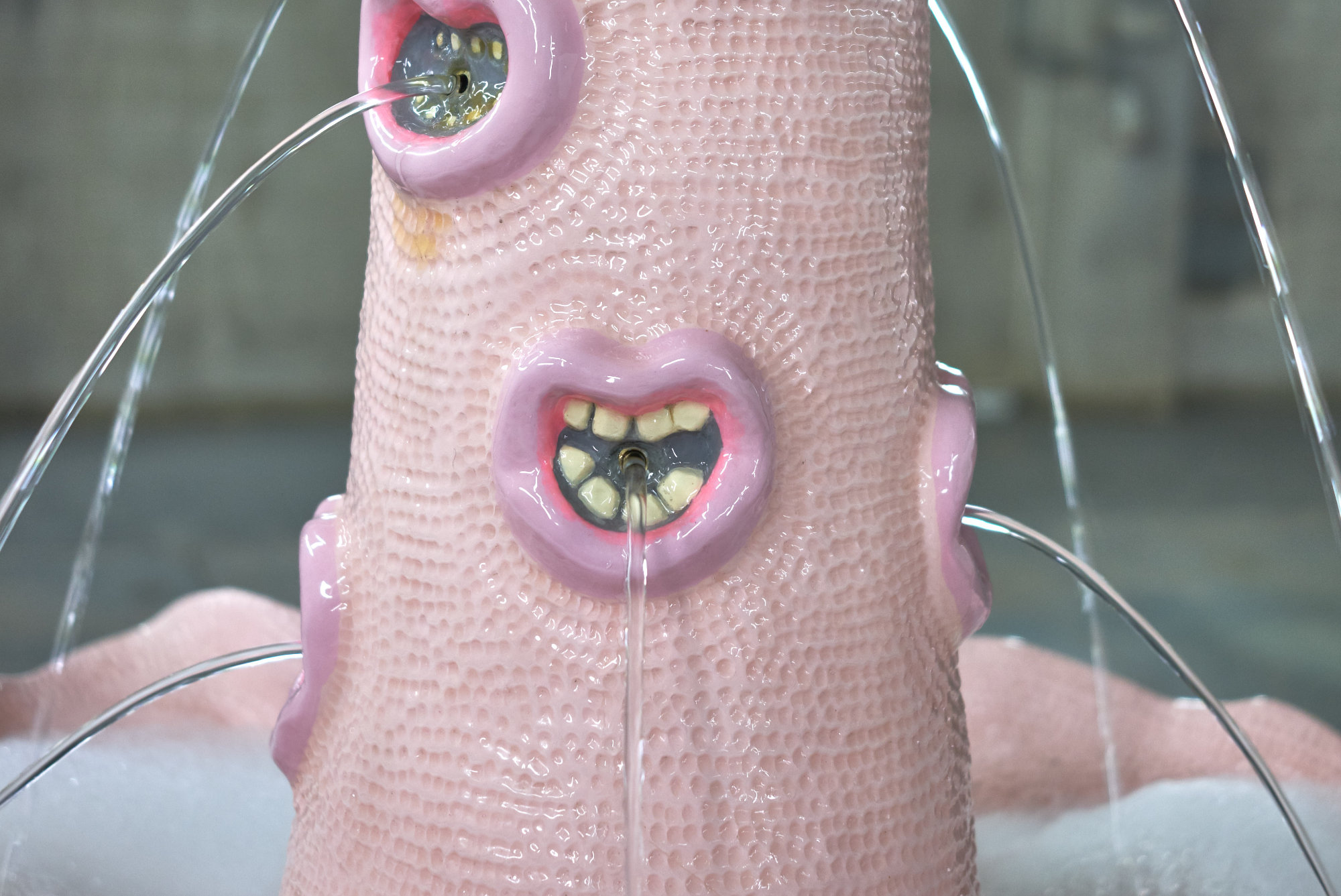 Monika Grabuschnigg’s works assert themselves as confidently in a direct encounter in space as on the screens on which digital images circulate. In fleshy pink, with traces of manual production, her stele-like works, reminiscent of surrealist inventory, are bodies and signs in the digital/analog world: here, matter does not become the pretext for a plump rhetoric of “resistance,” allegedly eluding digitalization or digital mediation, but makes the plunge onto the screen with aplomb. Seen in close-up, the colors change again: candy-like, glossy. A multitude of lipsticked mouths spit foam, which the ceramic pump “organism” swallows in order to pump it back to the mouths again. A classical fountain thus becomes an object that illustrates the possibilities and visibilities of sculpture in our digital/analog world: from the foam structure that constantly rebuilds itself to the circulating liquids and the fleshy/flashy mouths. From the gallery to the smartphone and back. – jury statement 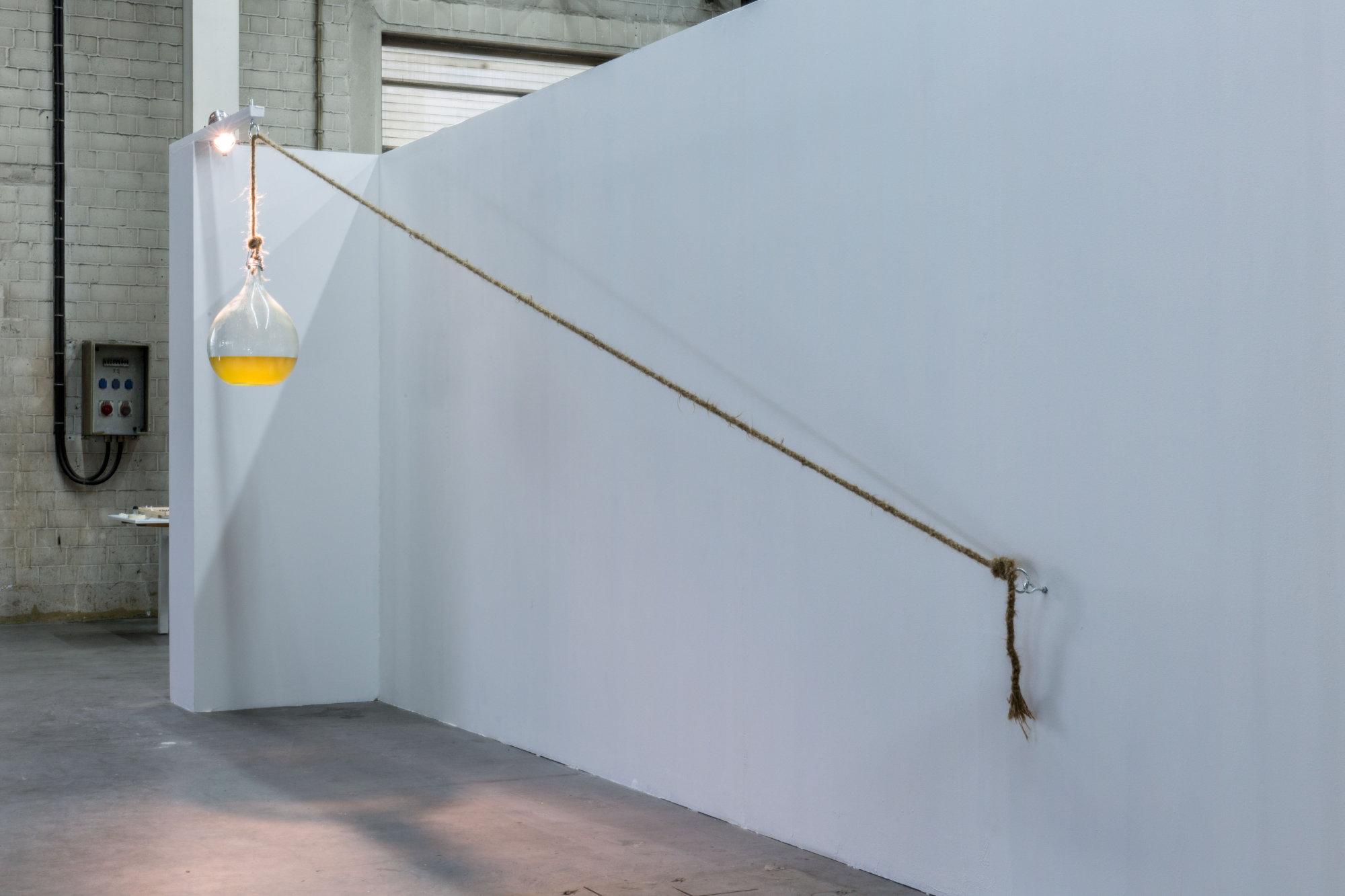 Alanna Lynch’s research work delves bravely and deeply into socially uncomfortable topics. By working with her own urine and hair as the very core of the human essence, she conveys urgent deconstructions of race and gender. Lynch’s long-term archive looks at internalized hierarchies through a multi-species perspective. Her work confronts us with our own human taboos by actively engaging us in smelling and touching what we typically turn away from. By compelling visitors to encounter themselves and each other through something as natural as the hair we all shed, she also manifests an exploration of difference and sameness. Upon consideration of the discussions that took place as a result of this engaging work, the depth of research by the artist, as well as its experimental framework, the jury chose Alanna Lynch’s installation as a standout work within the exhibition. – jury statement

“Our weapons of magic are made within our bodies and they show themselves when among the alien gods we are.” A saying created on the spot, inspired by Navajo battleground protection songs and O’Malley’s challenging film. The work is bright, strangely reserved, and fragile at the same time—and it manages to speak on these weapons of magic made inside our bodies that contain future. Is it possible to speak about these bodies, our bodies, without calcifying gender issues as cultural capital? Gender fluidity continues to challenge the modernist utopia of the future, no matter if it’s in what’s called the past or what’s called the future. In this work, Doireann O’Malley reveals her desire to be a superb storyteller with difficult content. That she is open to risk and challenging herself as an artist. She cares deeply about the reception of different stories. And she has dedicated herself to them. – jury statement 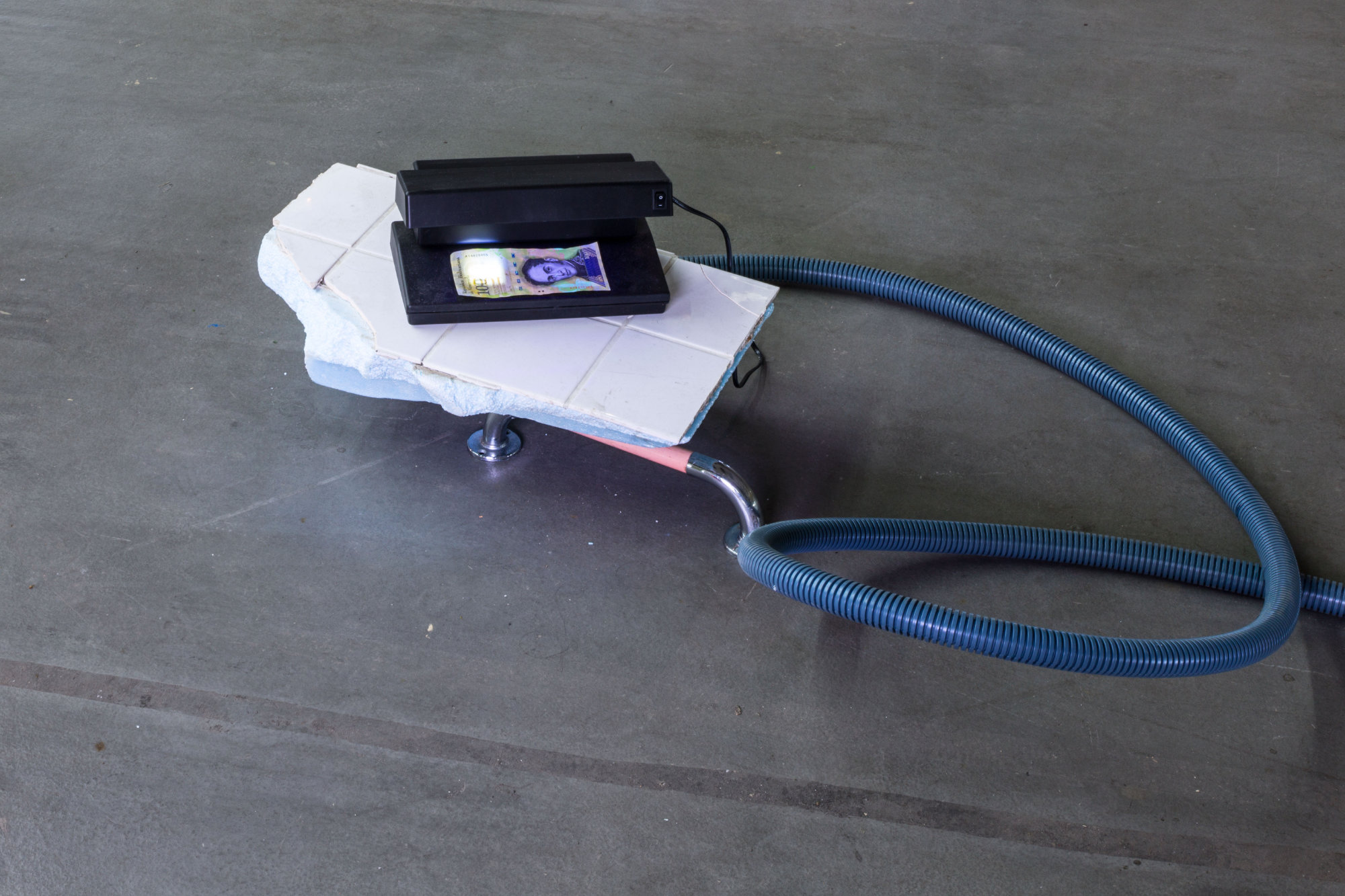 Ana Alenso‘s installation 1.000.000% for the Berlin Art Prize 2018 deals poignantly with the failure and inequality of the capitalistic system. Looking at the immense humanitarian crisis of her country of origin Venezuela, she manages to create a strong installation that embodies this crisis’ complexity and absurdity through the material flow and destructive power of capital and oil. Her work convinces by displaying a system in crisis. – jury statement